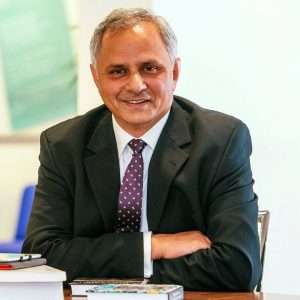 Prof. Dr. Asghar Zaidi, a renowned international social policy analyst and expert on population ageing, is the 31st head of this one of the oldest and most prestigious educational institution of our country. He holds a PhD in Economics from world's top university i.e. University of Oxford, UK.

He has exceptional academic credentials with many articles published in the top ranked journals to his credit. He has authored five books and contributed to chapters in more than 25 international books. Apart from academic publications, he has written and contributed close to 50 official reports for world's most reputable organizations and governments including UN and European Commission.

Prior to returning to Pakistan in October 2019, he has been working for the last thirty-five years with different distinguished European and UN-affiliated organizations. He worked in universities in the UK (including University of Oxford and London School of Economics), the Netherlands (including Erasmus University and Tilburg University), South Korea (Seoul National University) and China (including Chinese University of Hong Kong).

His immediate past post was Professor of Social Gerontology at Seoul National University, a public sector University in South Korea ranked 36 in the World QS Ranking 2019. At the same time, he has also been Visiting Professor at London School of Economics and Senior Research Fellow at Oxford Institute of Population Ageing, University of Oxford, the UK.

Previously, he was Professor in International Social Policy at University of Southampton (UK); Director Research at European Centre Vienna (Austria); Senior Economist at OECD Paris (France); Civil Servant at UK's Department for Work and Pensions in London; and a Researcher at London School of Economics, University of Oxford, Erasmus University Rotterdam and Tilburg University.

He is a global leader in the field of population ageing and has also recently published reports on population challenges in Pakistan in collaboration with Pakistan's Federal Ministry of Human Rights in Islamabad, the British Council Islamabad and Alzheimer's Pakistan in Lahore. He is a member of the Steering Group of the UN Titchfield City group on Ageing since 2017; until recently he was also a member of the Steering Committee of the Global Ageing Center in Seoul.

In 2019/2020, the Shanghai Government awarded him the prestigious 1,000 Foreign Experts Scholarship, with an offer of the position of Adjunct Professor at Shanghai University, China. He has also been an adjunct professor in the Chinese University of Hong Kong.

Since he joined Government College University (GCU) Lahore, he has offered services to this most prestigious 156 years old institution of our country. With youthful enthusiasm, he has been busy applying his remarkable international experience in discharging his duties as the Vice Chancellor of GCU. He wasted no time in initiating several reforms towards introducing new measures of governance and management and for betterment of teaching, research and work experiences at this oldest seat of excellence in Pakistan.

For example, within the first few months, he organised events in which high level policymakers of the Punjab interacted with academia to discuss issues of public policy and governance. He introduced reforms to improve student services on offer, especially in initiating online teaching but also in measures towards improving health and well-being of the GCU community.

Special steps have also been taken towards the merit-based appointments and in the development of entrepreneurial mindset among students. He started the Durs-e-Quran at GCU after a gap of many years to focus on moral training of the students alongside professional education.

Among the other noteworthy activities, he has served in the committee of seven Vice Chancellors who recommended the teaching of Holy Quran with translation at Punjab Universities. He is also currently working with Punjab's Higher Education Reforms sub-Committee for the improvement in the quality of higher education in the Punjab.

Steps during the Corona virus crisis

During the Corona virus crisis, he led from the front in introducing several new measures.

In terms of his innovations, he took forward the work of Dr Mahbub-Ul-Haq in developing several Indexes of social welfare of older population.