In this connection, the Directorate requested the concerned to send their complete profiles to the Director Sports GCU Lahore. Please click on the following button to download the form. You may send the filled form directly to:

The mental and physical health of a country can be judged from the standard of its sports and sportsmen. As a general rule, it is through sports that one develops Winning Trophies of Government College Lahore, 1914a healthy body, which ultimately leads to a healthy mind. The importance of sports in the life of a nation cannot be over-emphasized. The importance given to sports by the developed countries is no less than education. They have planned systematically for the development of Sports, which has paid the dividends. Like-wise in the GCU, sports are considered an integral part of physical fitness and mental training. These activities have a profound effect on the physical fitness and mental health of the students, which has ultimately enhanced their capabilities and efficiency. GC University leadership has provided full encouragement and a conducive environment to the sports programme right from the beginning. The sports history of GC University can be traced from the 1931-32 session when GC became the overall champion and won the general trophy of the Punjab University for the first time.

The GC achieved supremacy by winning 12 times the overall general trophy and securing overall runners up positions 4 times between 1931-47. During this period GC produced a number of outstanding sportsmen who not only brought honour and glory to their college but also had the distinction of representing India in the Olympics and various International Sports Events. After Independence, GC kept on its outstanding traditions in the field of sports and maintained its excellence and edge over the rival institutions. GC won the general all round trophy 20 times and remained runner's up for 22 times from 1947-48 till (1988-89).

GC is one of the finest sports nurseries for producing and grooming sportsmen for National teams, and has been maintaining its tradition of excellence in sports and has produced hundreds of international sportsmen who represented Pakistan with distinction in Olympic Game/Asian Games / SAF Games and other International Sports Events since 1947. After getting the status of University in 2002 the GCU leadership started revamping the sports activities on higher level and re-established the Sports & Physical Education Department. A new post of Director of Sports and Physical Education was created and a Director was selected in July 2004.

GC University has kept on healthy tradition of excellence in the field of sports and takes pride in maintaining high standard in every field of sports activities. GCU always play for the glory of sports and has the privilege to participate in all games organized by Lahore Board, HEC Sports Competition with distinction. 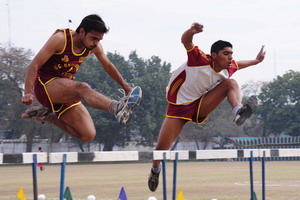 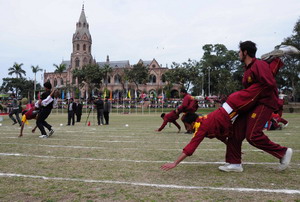 GC University has also produced some of most outstanding sportsmen and athletics in the country who have represented Pakistan abroad.

The students of the University have been actively participating in the inter-university competitions at the provincial as well as national level. The sports are organized and managed by the Directorate of Sports.